Josef Hoffmann with his creative power and, above all, his feeling for design, played a major part in the shaping of the aestetic perception and aestetic understanding of the 20th century.

In today’s Czech Republic, Bohemia and Moravia the results of the industrial revolution were more obvious than in the other parts of the Austro-Hungarian empire. Josef Hoffmann (born 1870 in Pirnitz/Moravia) and Adolf Loos (1870-1933) both came from that same area. Many creative minds derived from this region and enriched Vienna’s economic life in the empire at the turn of the century.

From 1887 Hoffmann attended the technical college in Brünn, where he studied the methods of classical architecture. After his practical year in Würzburg as a student of architecture, Hoffmann studied from 1892 at the Academy of Fine Arts in Vienna built by Theophil Hansen. His teacher, Carl Freiherr von Hasenauer was then at the peak of his popularity due to his ‘Ringstraßenbuildings’. A scholarship connected with the ‘Prix de Rome’ enabled Hoffmann a stay in Italy. After his death Otto Wagner (1841-1918), the most famous architect at the end of the nineteenth century, took the class over. Hoffmann joined the office of Otto Wagner after his return form Italy. There he got aquainted with Josef Maria Olbrich.

If one tries to puzzle together all the complex list of trends in arts of the last century, he ends up with three leading principles:

Firstly, the ever declared wish to tear up with all links to tradition and to present himself as completely modern.

Then, as the second principle: the ever-growing interest in the international art trend. Everyone tried to look at himself as an European. And thirdly: artist-groups were formed almost like political parties, organising themselves and declaring their intentions loudly. And they often argued with each other.

Together with other artists, Josef Hoffmann established the so-called ‘Siebener Club’. After Hoffmann demonstatively left the Künstlerhaus with a number of colleagues including Gustav Klimt and Kolo Moser, an organisation of graphic artists, the Secession, was founded in 1897. The new organisation’s home built by Josef Maria Olbrich offered young Hoffmann, as an organiser of the exhibitions, ideal opportunities to present himself to an art loving and progressive circle of potential clients. The society of those days seemed to showan interest in art to an extend which was unknown before. The conventional salons, academies and the like very quickly lost their influence in the same way - as modernity questions the authority of tradition.

If one takes a look at Hoffmann’s works from this time, one can cleary indentify the influence of Otto Wagner’s school, which determined the structure of an object through the emphasis on the surface. This was as important to Hoffmann as Belgian Art Nouveau influenced the Secessionists.

In 1899 Hoffmann’s name was so well known, that he was appointed as a professor at the Viennese School of Applied Arts (Kunstgewerbeschule)and commissioned for the interior-design at the World Fair in Paris of 1900. At the beginning of 1900 a basic change in his style can be noticed. With the turning away from the curves of the Secession and Art Nouveau a trend towards simpler forms appeared. At this time patterns from Britain had their special influence on Hoffmann. His admiration of the latest developments in architecture and applied arts in Britain is easy to be explained. On the one hand numerous illustrated magazines allowed an exchange of information. On the other hand there was a number of Secession exhibitons where British artists took part amongst them C.R. Ashbee and Charles Rennie Macintosh.

Starting with the 14th exhibition of the Viennese Secession (1902) there was a strict move to independency from other countries with the benchmark of The ‘Suppraportenrelief’, a cubistic engraving in plaster, designed by Josef Hoffmann for the foyer of the Secession building. 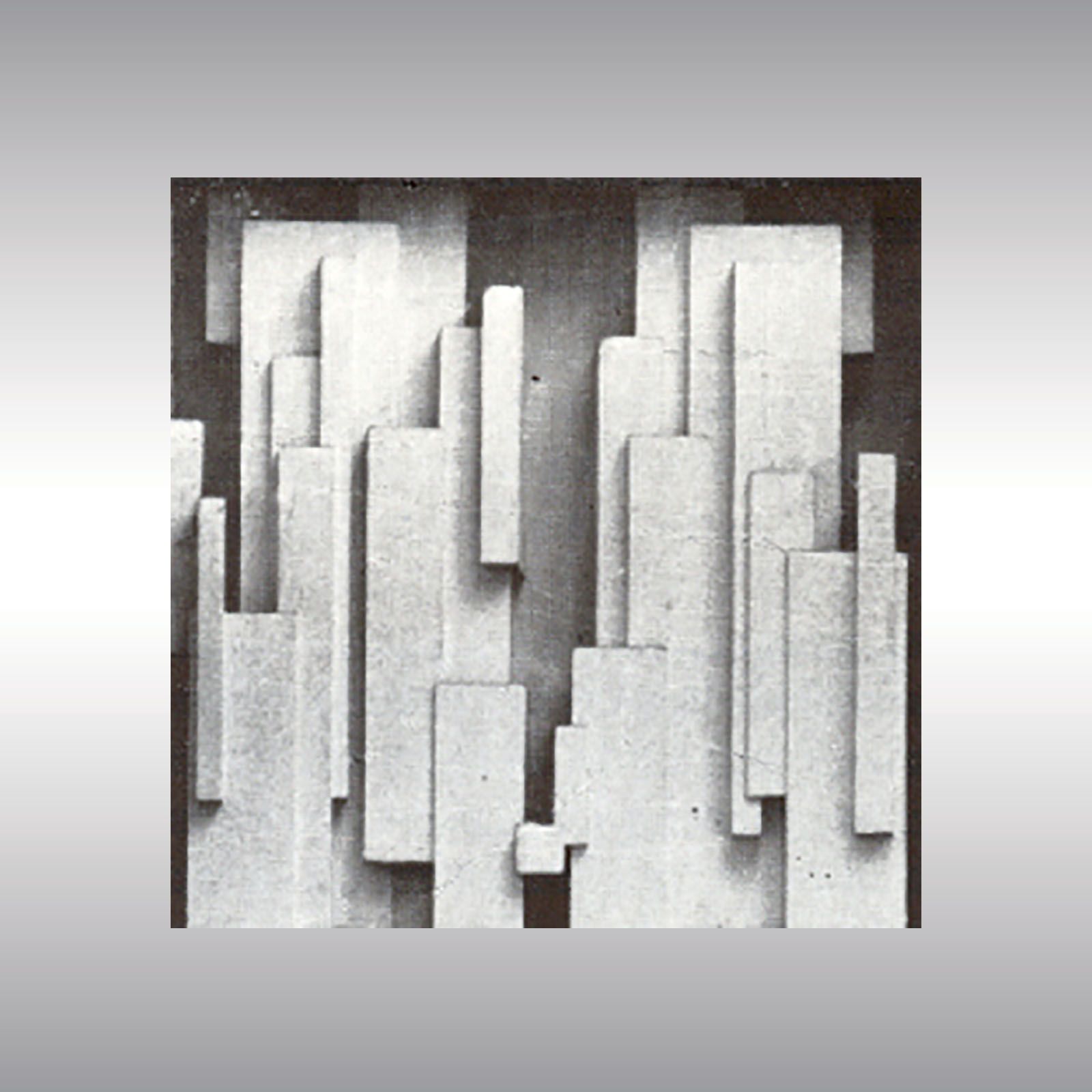 Hoffmans explanation for his favour for circles and squares was, that these forms never have been used before in applied and fine arts.

If one consider, that the term ‘Cubism’ was used only from 1907, after Picasso has developed a new interpretation in history of arts, the importance of Josef Hoffmanns step from 1902 can be appeciated.

During this very important phase of development Hoffmann was appointed to build a colony of villas on the hills of the Hohe Warte in Vienna. Due to the Secession activities, Hoffmann was a close friend of the customers, and this gave him the chance to design houses that suited both his and the builders’ ideal. This was to reach an unity of both, the outside and inside, or as in Hoffmann’s own words, ‘to build a house who’s exterior is one with the interior’.

With the interior design Hoffmann’s transformation is even more remarkable. He moved away from the Secession and for the first time he reveals his own unmistakable and independent style. Hoffmann’s turn away from the sweeping curves of Art Nouveau and his turn towards simpler forms has to be seen in the historic context of moving away from the floral Jugendstil, which started to spread in Europe around 1900 and went along with the renaissance of classical ideals. Following the Hohe Warte houses Hoffmann was appointed to do the interior decoration of a number of Viennese apartments. At that time he was Vienna’s most fashionable architect. His works were so revolutionary that one could say, a new era had begun. In later years Hoffmann explained his interest in square shapes and the often use of black and white of those days by arguing that these clear elements never had been incorporated in the styles of previous epochs.

The sculpture ‘Supraportenrelief’ was created by Hoffmann for the fourteenth exhibition of the Secession in 1902 . It is known for its final turning point towards a new feeling for design. Workshops started all over the world to find new and contemporary forms, which no longer wanted to follow the example of historical tradition.

With the fortune of the young and art loving industrialist Fritz Wärndorfer and with the enthusiasm and creative power of Kolo Moser and Josef Hoffmann the Wiener Werkstatte was founded in may 1903 - the productive community of artists and craftsmen who was meant to impress the life of Hoffmann deeply as well as that of the whole Viennese art scene.

The clear goal of the Wiener Werkstatte was to include all prospects of human life into one unified work of art. It was also decided to approve only objects of outstanding individuality and beauty and high attention was put on exclusive and exquisite craftsmanship. This followed the organisation’s motto: better to work ten days at one piece than to manufacture ten pieces in one day.

Between 1902 and 1904 Hoffmann’s purist phase reached its peak and he concentrated solely on the refrom of the element. Such an amount of purism often went against the wishes and intentions of his patrons, as they often longed for the richness of historicistic furniture which was meant to match with their lifestyle. Hoffmann’s artistic fantasy would later be able to react on such a demand. Once he had moved away from his phase of riding himself of historic weights he was again ready to let Art deco developments flow into his work.

The first big order for Josef Hoffmann and the Wiener Werkstatte, the building of the Sanatorium Purkersdorf (1904) including its interior design, came about by the aquaintance of the building contractor with the art critic Berta Zuckerkandl. She, as a supporter of the Secession and admirer of Josef Hoffmann, recommended him to the builder.

The Sanatorium was designed for a circle of well-off patients. Dedicated to the highest levels of comfort and luxury, Hoffmann, when building the Sanatorium, made use of the most modern available techniques - reinforced concrete. His original plan showed that he was inclined to take even more radical advantage of new construction techniques than in practice were actually possible. Decoration on the building was used sparingly. The outside as the inside are convincing with their simplicity of concept and erection. There are fascinating contrasts between the severity of the architecture and the more decorated interior. The intended purpose of the Sanatorium pulled for a level of hygenic sobriety which helped Hoffmann in his design. After 1904 a number of projects were carried out where Hoffmann’s search for simple forms are clearly perceivable but the choise of material and the working methods made the objects even more splendid and opulent.

The internationally recognised peak of Hoffmann’s career is the Palais Stoclet in Brussels. Its dimension, quality and architectural significance was an accomplishment that was not to be surpassed throughout his long career. Not only had materials and techniques of manufacturing become more complicated but also a change into a new direction of Hoffmann’s creative work is distinguishable as of 1905, when a return to shapes of classicism occured.

All these tendencies were channelled into the building and coupled with the financial strength of Baron Stoclet. This order resulted in Europe’s probably most spectacular masterpiece of complete art of its époque. When building the Palais Stoclet, the relationship between the patron and his architect was the happiest imaginable. A fact which is cleary expressed in the consequent atmosphere and quality of the building where no compromises were made, neither with the outside finish nor with the interior.

The same artists, who worked on Stoclet were also involved in the design of the Cabaret Fledermaus in Vienna. Apart from Hoffmann many other artists like Wimmer-Wisgrill, Czeschka. In 1912 they were the founders of the Austrian artist group ‘Werkbund’.

Before Word War I the works of Josef Hoffmann shortly reveal an individual approach to classicism and ideally reflect the need of representation of a social class, whose days were already counted due to political circumstances. The Villa Skywa-Primavesi was Hoffmann’s last great performance before the First World War, whose outbreak put an end to private enterprises for a number of years.

After 1919 Josef Hoffmann was very ill for many years. He even had to pass on the management of his studio to Oswald Haerdtl for some time. But Hoffmann applied himself to the creation of new forms till his death.

After World War II, Hoffmann assumed a number of official duties but received less commissions for design. His official engagements comprised the membership of the art-senate and the Austrian general commissioner for the Biennale in Venice.

In may 1956 Hoffmann died at the age of 86. His life’s work includs all areas of fine arts. As the initiator of the Viennese Secession he had a decisive influence on the drawings and the painting of his time. As a founder of the Wiener Werkstatte he revolutionised the arts and crafts.